Meet Green Heron – one of our neighbors Butorides virescens

Our good neighbor has found small ponds on our rocky, treed property that I’ve never found myself, and I’m happy for that – Green Heron Person doesn’t harm the water holes so I won’t harm them either. G.H. also spends time on our “ironshore”, where the limestone rock meets the sea. A loud, unmusical call occasionally announces the proximity of G.H. who otherwise remains a peaceful presence, or absence – its comings and goings unannounced. If you’re lucky you may see the erectile feathers on the top of the head if our good neighbor Green Heron feels angry at something or other.

This is a really close neighbor, and a good neighbor, who walks our deck railing very often, especially in twos and in certain seasons. Sometimes they walk the actual deck instead of the rail so we keep the sliding doors closed. No matter how ecologically “good” we ourselves try to be we will never approach this neighbor’s benefit to plant life by wide distribution of seeds. These associations teach us, if we are open to learning, that “Re-Wilding” is a matter of standing back and allowing nature to do just what she did in greening our planet earth in the first place. But we must have left enough wild land to accomplish this regeneration.

The tree in the photo is very close to our deck, which explains a good photo with my modest camera and limited skill. The bird, the tree and the proximity make the photo for me. All I have to do is hold the camera steady.

Zenaida Doves do not leave their auto a/c on while parked at the supermarket. But I’m sure they have methods of cooling as well as cooing. One method is to shift their range north along with so many other birds. Over my lifetime I’ve watched many bird species do this – Turkey Vultures commenced shifting north long before the term global warming was invented, and many decades before television “weathermen” and women were allowed by their corporations to use the term, disliked by “deniers” – another term the birds don’t need to learn.

The next photo shows a complete contrast in landing sites! Instead of a good, firm branch, here we have a regular latticework of vines – several species of vines all networking and making a web as they ascend trees and other structures as they’ve been doing for eons. (I mention eons because some of our human associates like to chop vines as if they are harmful.) Just think of the sure-footedness of a bird that would choose this landing pad, high in the air. But it may be safer for the dove than a solid branch! Oh … a question for you, the reader: Is this the same dove as photographed above? I don’t know. 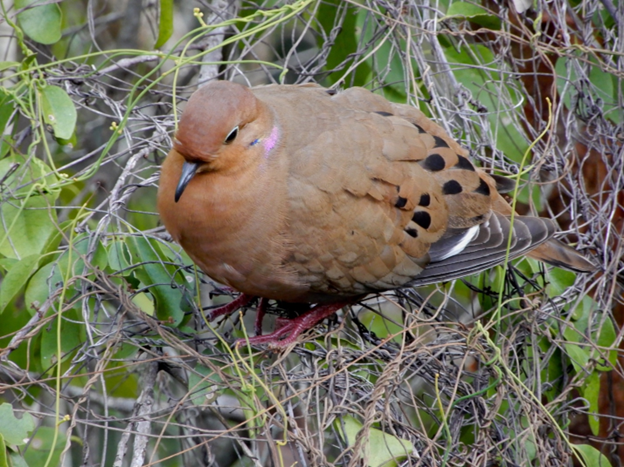 Here’s a note on my use of the term “bird person”. It’s a technique used by a good friend to help us visualize all nature’s life forms as being on the same level. This is an extremely important mental shift. But I’m going to quit using the term because it implies we should equate the Zenaida Dove, for example, with our own status on earth. But I would rather call myself Bird, or perhaps Avian … because we humans damage our natural home in perhaps 90% of our activities, and our Zenaida Dove friends do not bother anything at all, including me. We share space on our earthly home and this creature has a better chance of being here when we are gone than the other way ‘round. So … simply Zenaida Dove will do from now on.

Now, having looked at one shorebird and one bird of the land, let’s try a seabird:

Bo’sun Bird is the local name on Cayman Brac for this exciting species. Our vertical cliffs with small caves (and medium, and large) provide safe places for nesting, as long as visiting thrill-seeking, roped- up recreational climbers stay far away … on the cliffs of other countries perhaps. It was said that old-time fishermen could simply follow the Bo’sun birds to get back to the Brac after a day at sea.

One scientist came to map nesting sites and gave me a call every day at first: “No Bo’sun birds today” but they were due. I pictured him suffering in the sun. Then one day “Okay, one hundred just spotted at sea – they’re coming!” He did yeoman’s service, mapping every nest – a map we could use today to protect our bluff, which is Crown property and needs only rules and enforcement (both at a nascent stage lest we discourage tourism).

The Latin “phaethon” leads to an interesting story in my dictionary: “The son of Helios the sun god. He asked to drive his father’s solar chariot for a day, but could not control the immortal horses and the chariot plunged too near to the earth until Zeus killed Phaethon with a thunderbolt in order to save the earth from destruction.” Perhaps Zeus could look down on our mindless over-exploitation of this same earth, with the same aim.

Thank you, Tropicbird – vigorous defender of your young. You face out at the back of your hole in the cliff face, ready to repel any invader.

Now moving along to our Red-Legged Thrush, a few of whom live in the rafters that support our house- on- stilts – in nacelles safe from the deadly feral cats that plague our island.

This is a juvenile – its legs haven’t yet turned bright orange-red.

Brac residents have a Cayman monopoly on this lovely species – which deigns to live on the other two islands. (But in Cuba they are thick as thieves.) The call is varied as the bird declaims its territory, sometimes on power poles where it can only be driven off by Kingbirds or sometime by Mockingbirds. Living here, we get a free course in nest-building and in the faithfulness of birds to their chicks.

I want to call this neighbor The Aerialist and it will take a few photos to show why: This first shot shows several safely-landed Boobies all focused on in incoming member of the family. I can almost hear them croak “Stick your landing!” in their deep, resonant voices. (Sorry for this anthropocentric attempt at wit.)

Then we have the family photo which shows that it all works in the end, producing the white ball of fluff which is the star of the show. The Booby Bird figures large in our island’s past and present – it was severely exploited in the past but is totally protected now in law, with steps to protect it on the ground as well against its man-introduced enemies (rats and cats primarily, though man himself was the worst. Don’t ask me to relate the stories! They were told to me in confidence.)

A note on the next photograph: pure serendipity accounts for the bird on the wing because I was only shooting the seated family with my small telephoto lens (Coolpix). I discovered the fly-over in the photograph when I checked it out later!

Our island may be the only place in the world where you can walk from a lovely village (Spot Bay) and find nesting Brown Boobies. Although once strung along cliff edges on both our north and south cliffs they now reside on (and under) our dramatic eastern headland. Oh, and by the way – there is not even one scrap of protected nature reserve on that headland … unless some of our recommendations are adopted by our National Conservation Council and funded by our large Environmental Protection Fund, controlled by our government but eked out to protect our debt ratings.

Do I have a favorite bird? No I don’t but this one seems to be able to survive and prosper even in the midst of the many perturbations we bring upon our island, and even in the sea around us (now hosting a growing mat of Sargassum Weed as the sea continues its inexorable warming). Take this photo for example. I took it while visiting Point o’ Sand on Little Cayman. (The Yellow-crowned night heron abounds on our “sister islands” but one nature educator told me he discovered, while doing a slide show on Grand Cayman, that the students there didn’t recognize this bird, which is so common here! Citification – that’s what comes of it. And that’s what our leaders are trying to bring here, using public spending for their private profit! It is up to us to stop them! Who else is going to protect our wild places and our wildlife? 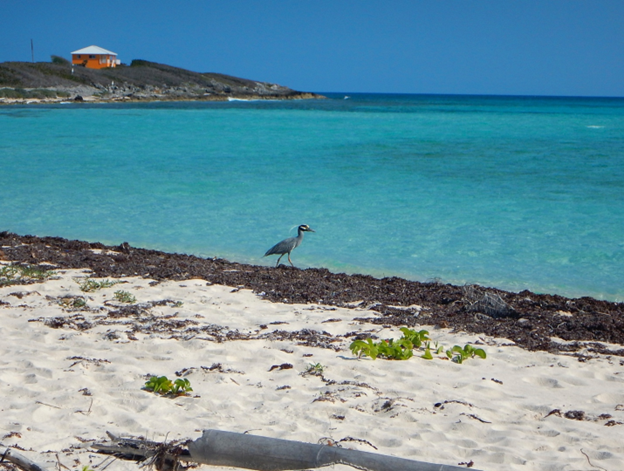 Here’s the juvenile of the species – checking out my homemade rain gauge. (Feeding wildlife is strictly verboten at our household but they find ways to make themselves at home. We have a defensive radius within which cats, dogs, rats and chickens are not permitted … and they know it.)

By the way, the sister species is the BLACK-crowned Night Heron. I saw one once on the Brac and we backed away, hoping it might nest near a long, narrow declivity in karst limestone formations (all such splits run the same direction, no matter how remotely spaced – go figure).

Next, a come-back story!

Bald-pate or White-Crowned Pigeon Patagioenas leucocephala
Not many years ago Baldpates were thought to be close to extirpation here but quickly we led the researchers to an area that had several – not near our house but not far away. The transmitters that were fitted showed their stamina in flight.

Shooters from Grand Cayman used to come to the Brac once a year! I didn’t know until I found a lot of empty shotgun shells in one area (now being re-wilded, by the way) and I went a bit ballistic. Some people tried to warm me off but for whatever reason, the annual visits stopped in its tracks. I think people thought I was Roger Tory Peterson or some such eminence who might actually do something. (Little did they know ….)

Today, if I look south to the treed bluff face I’d see one, and more than likely two or more, flying back and forth – it must be breeding season. And whereas Baldpates were once extremely shy of humans and remain skittish to this day, I’m able to shoot off a photo like this one if I’m patient, from our deck. They go ballistic over Naseberries but there’s lots else too, and we must never lose our Baldpates. We must never lose the natural terrain that they call home, especially not by clearing land for our houses, many of which remain empty. Hey – keep Cayman Brac natural!

Here’s a list of birds NOT described above, even though all can be seen from our house – if not weekly, then over a somewhat longer period. What do they have in common? Aha – I do not have good photos of them! They are equally valued, and one indeed is our closest to a truly Cayman Islands endemic – Vitelline Warbler. What else do they have in common? Most are small. I hope I’m not discriminating in favor of the bigger birds. We see more than these if we walk on our own shore but I’m limiting this list to those we see from our house.