I want to write about compression. Not compression in an automobile cylinder head (a ratio of perhaps 11 to 1) but much more extreme, 240 to 1. Scientists studying an Andean glacier over many decades have determined its previous rate of growth and its present rate of shrinkage. (They used extinct alpine plant life, newly revealed by melting and known previously from the fossil record.) Their conclusion, supported by other scientists not directly involved in the study, is that growth in the glacier that occurred over a span of 6000 years has been lost in the last 25 years! That’s a ratio of 240 to 1.

What about 10,000,000 to 1? All of us living today are experiencing this rate. We are living in the Anthropocene Era, and we are burning three billion years of stored organic material (mostly decayed plant life) in a mere 300 years. We use the resulting energy to power our cars, trucks, planes, factories … to heat and cool our homes, second homes and offices … to clear and burn our forests for wood products and fuel and to plant in their place edible crops to feed our seven billion mouths (so many people!) … and to feed our pets of course … and to plant flowers that we call pretty, presumably prettier to some people than unspoiled forest.

The biggest proportion of this fuel is not used at all – it’s wasted. We are frenetically consuming all the energy saved by natural forces over billions of years, in mere hundreds of years. A ratio of ten million to one.

And we act surprised to find that this activity has affected our air, sea and land!

We go into denial about it. But the crisis is not in the future, it is now. Hong Kong, to take one example, is a big, beautiful city which is no longer nice and healthy to live in because of air pollution.

Here is the same extreme ratio expressed in a different way. Pretend you come upon a giant tree, a California Redwood that took 1000 years to reach its immense size. But you want to consume it, so you burn it to smoke and ashes in less than an hour! That’s the same compression ratio, the same compression of time. Great, eh?

I’m not finished yet. The smoke and heat from burning that tree cannot disperse from its own “air column” to adjacent air columns, because all the trees are burning, or have burned. Their combustion products remain with us. There’s no clean air to dilute the smoke, heat and the gaseous chemical brew. There’s no place for it to go.

I’m not finished yet. You and I live in the same dirty air column. Think of a dome placed around the burning tree, and think of you and I living inside the same dome. Our tiny dome is called the earth’s atmosphere, and it’s foul. We have befouled it. (Our atmosphere is tiny. In comparison to the size of our earth it is like the skin of an apple compared to the apple.)

Homo sapiens? I don’t think so. Not smart at all to continue doing these things to ourselves.

Any politician, business leader, leader of religion, the military, non-government organizations, education, think tanks, the arts and sciences, supranational institutions, who are not working to stop this compression, this race to annihilation and to reverse it, is not acting responsibly. More personally, such leaders cannot claim to be responsible parents or grandparents of their own children let alone unfortunate children in other parts of the world.

To work on any other matters (except military domination of a dead earth) without simultaneously working on this one, demonstrates a wrong set of priorities.

Take a stand. Get busy. Network. Lobby. Reverse the plague of excessive growth, over-consumption, over-population, over-use of resources, gross violation of our home. Adopt this cause as your own. Our only home is planet earth, our only sustenance its land, sea and air.

Is this our goal? 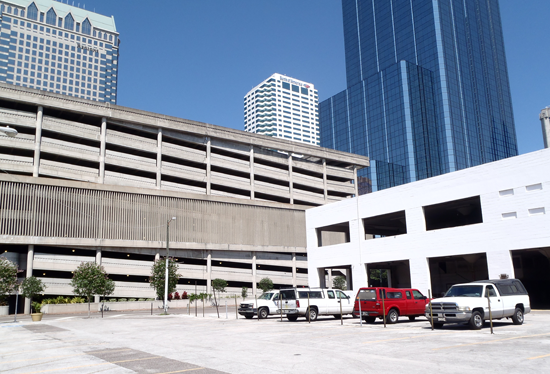 I call it urban blight. This was a once a glorious sub-tropical forest with ponds, sloughs and hummocks, pouring oxygen into the atmosphere. Now it’s given over to man – but where is man in the picture? Where are men, women and children? The place is a sterile wasteland, built at great cost in money and resources. It was totally empty when photographed on a recent long weekend. During a weekday it looks the same but with more parked vehicles, especially in the huge parking garage. There is scant provision for getting to work by any mode other than by car.

The photo above is not my home. But it is the urban model we are copying. Is this how we want our earth and our lives to “develop”? It is the path we are on today. Try the photo below instead: this is an unspoiled (but not protected) part of Cayman Brac. This offers a better environment for nature’s creatures to live and breathe and prosper, including ourselves.