Plant people, we are losing our rarest plants to theft.

Add this to loss of habitat, spread of alien species and all the other challenges, and it’s clear that we need to work harder to protect our precious natural heritage. Here are some hints: show our rare plants only to people you trust implicitly, and tell them why they must not inform others. There are thieves in our midst!

And thieves who visit – international plant thieves. (Check specific wild plants on the internet and you’ll see they are stolen, cultivated, and offered as cures for everything from toe fungus to loneliness – just as “snake oil” was peddled in the 19th century, in a previous venal era, almost as bad as today.)

“Visiting scientists” are not genuine unless they have certificates from the Department of Environment. You can accept recommendations from DOE or from the National Trust on Grand Cayman, or through our own Chairman if he has been advised of an official visitor. (Visiting scientists have to go through screening, and make their findings available.) Be particularly wary of orchid fanciers – some of them so tempted by fame or fortune they lose all perspective, all respect for the forest. They will break our laws with no compunction.

There’s a long history here of stealing because it wasn’t thought of as theft – it was nature’s bounty. People used to fill car trunks and truck backs with wild orchids! Now, it must be stopped — with a checkerboard of “development roads” the bush is all too accessible.

There are international thieves and there are common thieves. Banana orchids were recently stolen right out of West End Community Park, for sale to the public on Cayman Brac. They were ripped from the trees by the roots, right on the nature trail. But it’s the less obvious thieves who do more damage – let it not be you or me.

Who does more harm – one professional thief taking 100 of our Brac endemics for horticultural sale in Europe, America or Asia?

Or 100 of our plant fanciers right here in the Cayman Islands, each taking one?

If the professional thief can be called a plant hater, and the amateur thief a plant lover, who does more harm? They are equally harmful. People are loving our plants to death.

* The asterisk refers to plants that were ripped out of the ground by the roots, so that not one portion is left. This is not a cutting, this is whole plant removed from its place in nature. Two of these (with question marks) had not yet been positively identified – now never will be. Three are plants that this author can no longer find anywhere on the Brac. Since we are losing natural areas every day to so-called “development” (often simply destruction) they may never be found here again.

Probably fewer than 10% of stolen plants survive the act of transplanting. We need new rules:

It’s a dangerous world out there, even here. One can no longer point out the specific location of rarities – the very thing that our happy group of  “botanizers” love to do. If anyone presses you for exact locations or for GPS readings, do not give them out. Just say “on the bluff” or “I forget” unless you trust that person implicitly by personal knowledge or by their DOE-issued papers.

Instead, perhaps you could switch to thatch work. That’s sustainable. You can take a few tops, do some thatch work, you can buy and sell thatch work and even give and accept it as a gift – work from your own hands, or the hands of friends. There are hundreds of harmless ways to entertain ourselves – let’s not do it on the backs of those innocents who came before us. 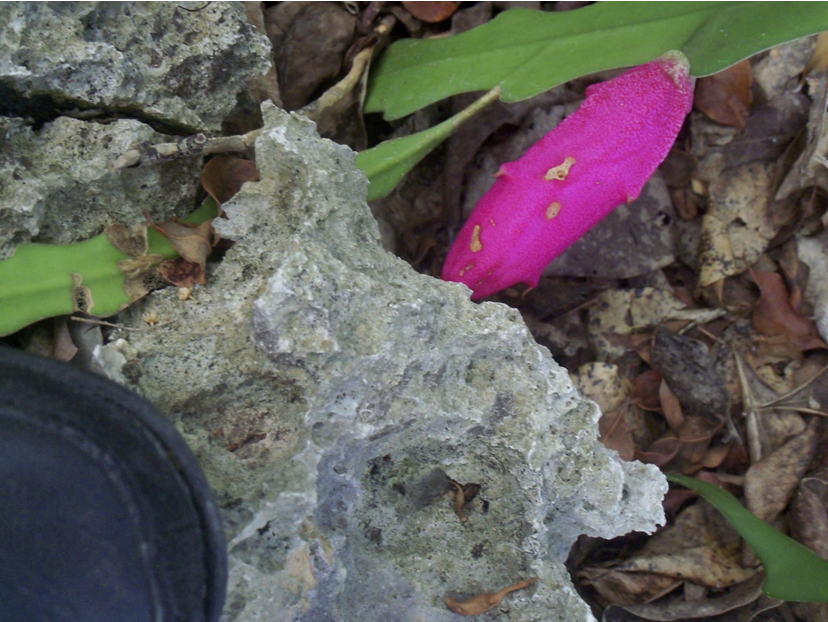 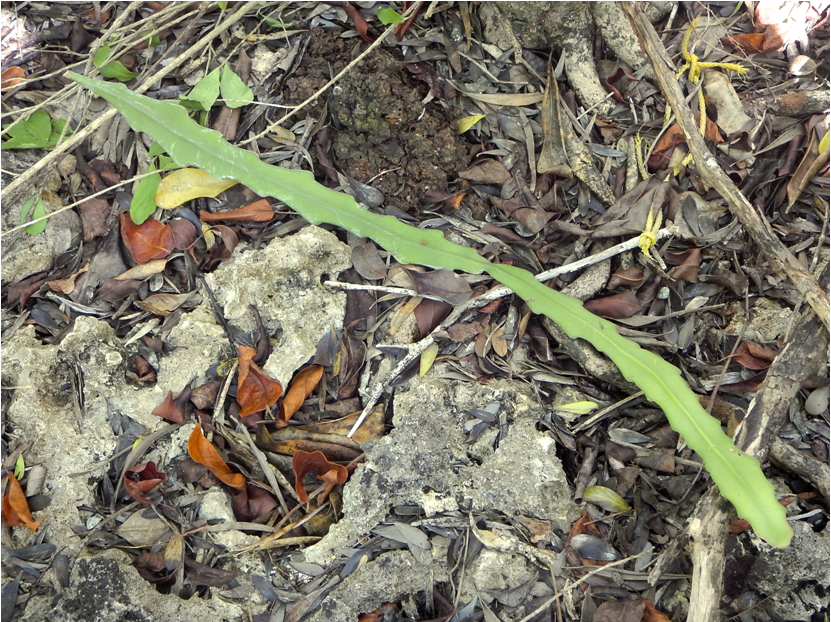 Ripped off to die 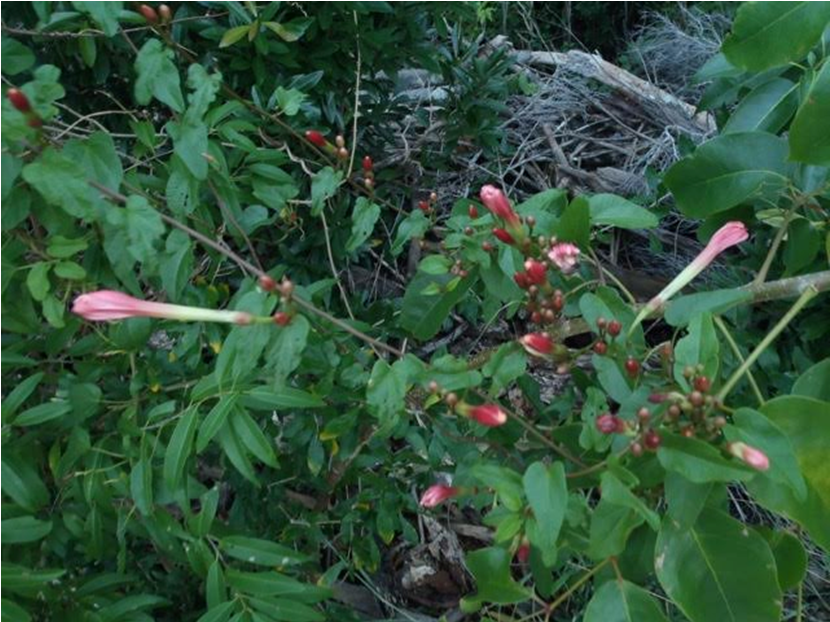 Ipomoea hederifolia (fuzzy photo; plant has since “been disappeared”) 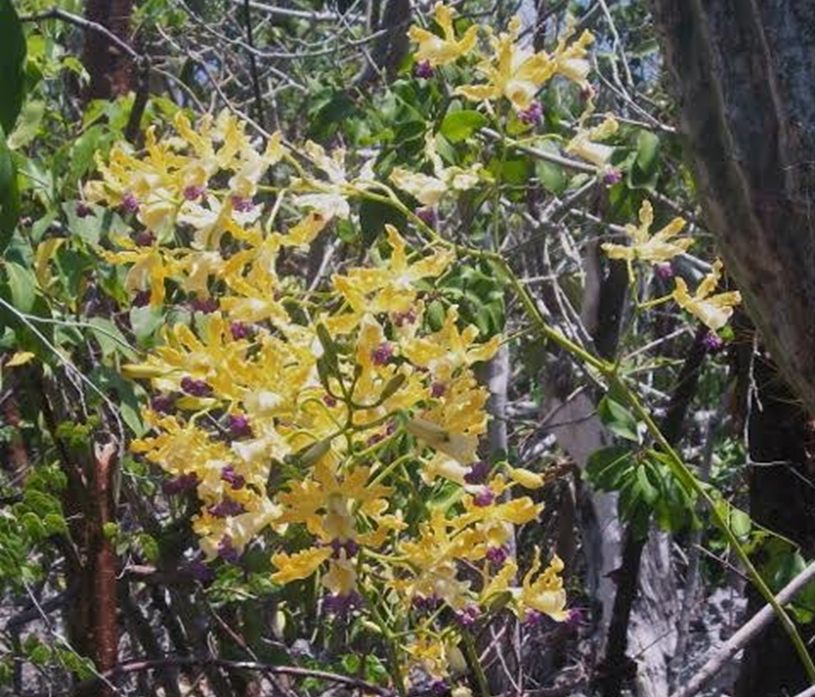 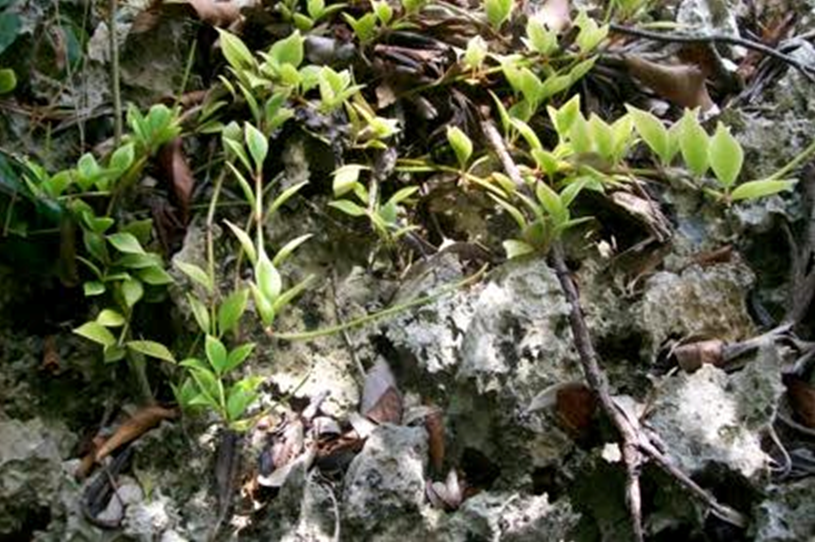