All of the best things to do are waiting for us — all we have to do is do them.

They don’t cost much — most are free. Just take a walk from your house or apartment … or take a bike ride. Walk for your groceries; walk to your church; walk to your bar, and walk home again — much safer for everyone!

The best things won’t “do it” for us; we have to do them ourselves.  It’s the difference between watching baseball on television, compared to playing a pick-up game with friends. What does it take — a ball, a bat, a little space, and someone to play with. Which one do you lack? Maybe the last-named. Well, baseball definitely works best as a team sport. Batting flies into an empty lot isn’t very rewarding, and I could never afford more than one ball anyway, so it’s really better to have someone to catch those fly balls and throw them back to you. (Oh, in passing — if you need an empty lot, come to my little island. They are everywhere. A bad habit is buying a bit of forest, bulldozing it, and waiting for it to sell. Like, for a hundred years. Apparently it’s legal, or semi-legal. Trees don’t vote, do they?) 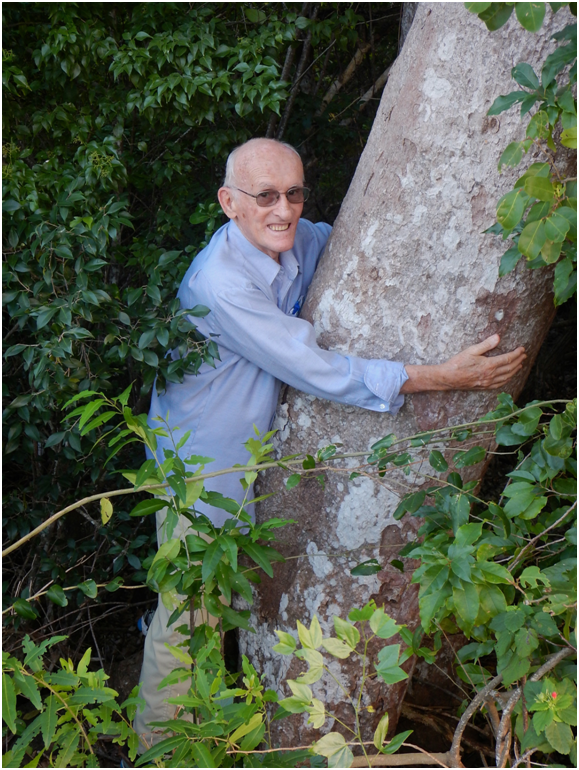 The best way we can honor Mother Earth is by doing her no harm. We can admire her in many ways without using any harmful technology in doing so. (Someone drove a 4WD vehicle along a turtle beach recently — not a good example of living lightly on the Earth.) We can walk the beach, admiring the way it is kissed by the early morning sun. We are honoring earth, sky, sun and sea all at that time, as in this shot of Hermann Beach on our little island, taken while on turtle patrol to find and protect turtle nests. 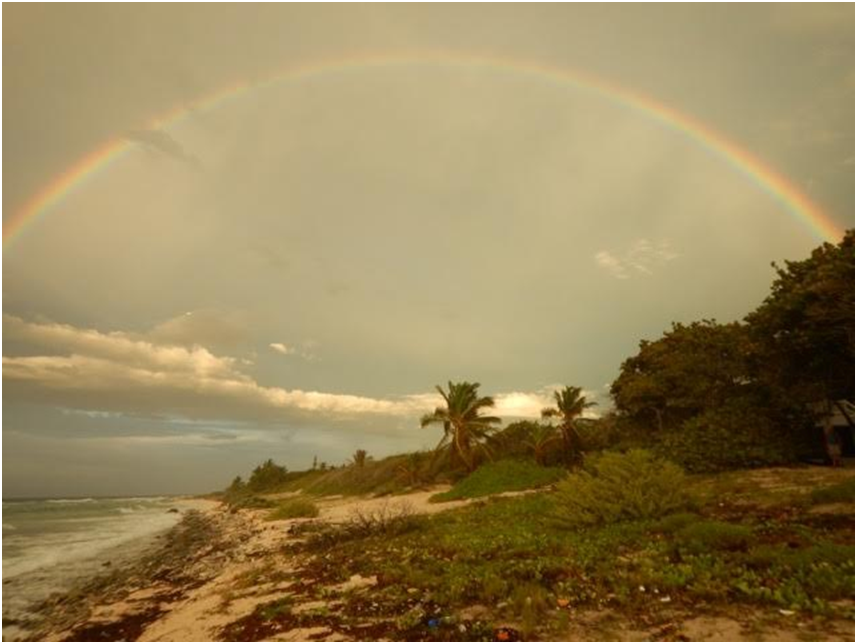 But to continue. What about motive power? Have you heard of “shanks’ mare”? If you have, you’re pretty old. Or you’ve been talking to some pretty old people (a nice thing to do). We don’t put out one horsepower like that mare but each of us contains a one-sixth horsepower engine. No, that’s wrong. Each of us IS a one-sixth horsepower engine. That’s the engine that powers your bicycle (hope you don’t have an infernal motor on yours), your cross-country skis, your paddle-board, perhaps your wheelchair but if not, your engine powers your jogging and running. Most universal of all, your one-sixth horsepower propels your walking o’er hill and dale. Can you walk? How fast? How far? Be proud of your walking. If you want to walk your country from end to end, I recommend Cayman Brac.

Use any of these modes and you’ll be less likely to do the earth actual HARM, and on Earth Day we must pledge, first and foremost, to DO NO HARM as Hippocrates stipulated in another context. Driving your ugly turbocharged SUV to three or four beaches to pick up sea-borne litter and add it to the ugly landfill — that is the WRONG thing to do on Earth Day. Doing nothing is better. Just sleep in.

Somehow we always feel impelled to DO SOMETHING when we’re feeling powerless against the forces of ruination of our one and only planet. But sometimes DOING NOTHING is the better course. It is difficult to do nothing, but sometimes that would be the wisest thing. Sling your hammock and just sack out.

Litter has consequences but is primarily an aesthetic problem, as well as an indicator that we are still wasting the earth’s resources instead of reducing our use, re-using our utensils, or recycling them. (A calabash was a fine container and didn’t need to be manufactured. Can you find a calabash? Make a net for it, sling it over your shoulder and when people ask where did you find that thing, tell them you flew to Miami and bought it at Target. No, don’t do that.)

When we appeared on the planet it must have seemed very big. Limitless.  Now it seems very small. Well, put nine billion people on it and it may well feel a bit small. 7,000,000,000 creatures self-dubbed Homo sapiens. Considering what we’ve done to Mother Earth — what we CONTINUE TO DO AT AN EVER FASTER RATE — we could call ourselves Homo rapiens.

The Good Book says “the times of this ignorance God winked at” but now we know. We know, if we have eyes to see and ears to hear. The same book urges us to be good stewards of our inheritance.

Time for a poem? A hard poem or a soft one? OK, I’ll give you the nice one first, the hard one second:

Another poem (Here’s the hard one)

Oh Lord, what have we done. Well, for example: Picture seven billion self-centred bipeds who take every invention to its logical worst use: cars (SUV’s to go to the mall); air conditioning (to leave “on”, engine idling, while doing the afore-referenced); television (how many channels? And what’s “on” at this moment?); information systems (how many town-sized facilities just to store all this stuff?) ships (clogged sea-lanes carrying toy bunnies?); advanced agriculture (so we stuff ourselves with sugar?); advanced fishing (to feed pets? pets?? …  thereby reducing wild fish stocks to 10% of their former numbers?) aircraft (up and down every 30 seconds at many ports, so some bozo can touch foot on each of the 200 countries? Wow, what an accomplishment.); armies? One country has 2 million soldiers. All of them must be fed, transported, given war games to play, given fuel to burn, the better to burn whole cities and countries in wars. Someone says we should ban outdoor burning, or regulate is strictly — someone else says we should ban wars. Hey, let’s do both! Billionaires building skyscrapers and arrogating power to themselves, co-opting whole governments? Anything to get a fifteen percent return, legally or otherwise, ethically or otherwise. Show me the politicians who won’t be co-opted. Show me the people who won’t vote for a strongman and thereby “Escape From Freedom” as the great Eric Fromm described for us to read and heed.

We’re using the Earth’s resources as if there’s no end in sight.

Here in brief is the story of the nice hotel, the nearby theme park, and the superb, nearby nature park:

LET ME GIVE A LITTLE FREE PUBLICITY TO LETTUCE LAKE NATURE PARK:

Wildlife abounds in Lettuce Lake Park. (The pad-like weed growing in the slow part of the river looks like lettuce – it is not.) I saw my first Black-bellied Tree Duck here — a “lifer” for a longtime bird-watcher (a very big deal for me).  This beautiful parkland is amazing. Boardwalks are extensive and well maintained. Made by God, protected by Man.  A movie like Avatar could be shot here. You are in the movie. Kayaks and canoe rentals are very reasonable.

So … why is the nature park not thronged with people, like the rides in the theme park? Aha … highly-skilled people work for the hedge fund that owns this “attraction” (and many others). In contrast the natural area is owned and run by municipal “Parks and Rec” which does a great job but doesn’t advertise. (If they did, Republicans would say it’s a waste of taxpayers’ money and steals visitors from private enterprise, that holy phrase from their daily mantra.)  The theme park offers corporate “deals” with the hotel but the hotel doesn’t say a word about the nature park, which is actually closer to the hotel. In truth, the hotel staff scarcely even know about it. Plus, what kind of “deal” could be struck with a park that’s free of charge?

BUT if a simple deal was made with the theme park people, they might advertise the nature experience, offer to train tour guides, raise the price a bit, make a profit and educate throngs of young people and adults about our shared natural heritage — whence we came. Do I sound like a Republican? Well, I have nothing against private enterprise, just so it’s properly regulated and pays its share of tax to keep things like Lettuce Lake Park safe from their grasping “development” hands forever. (Why is destruction oft-called development?)

Or maybe we’re all tools of the theme parks now. Everybody wants a ride called the Excelerator* but few people want to see a Water Moccasin except on a TV nature show (usually a sensationalized show).

“ENERGY NEUTRAL” is a scam. It always has been. ‘Way back in the ’70s a house was designed that would provide all its own energy and all its own food without recourse to the world outside. There was a catch: You needed several million dollars to build this home. It was built anyway, using vast resources. Then there came a string of breakdowns and maintenance problems. It’s the same today — in order to build an “energy neutral” house or hotel you have to use huge resources, rare earths, and produce excess energy you hope someone will buy, just so you can say you’re energy neutral. Whoop-de-do. Do the math — compare it with the “do nothing” proposition: the forest remains, along with the shrubs and vegetation grading down to the beautiful natural beach where turtles come to nest in the deep of night, following their ancient, mysterious, watery path.

We don’t need more income, we need less expenditure. Then we’ll be equally well off, right? Money in the bank because we won’t need as much to live on. This country has so much going for it — balmy breezes, verdant views, sandy beaches here and there, ironshore and cliffs elsewhere, huge sea and skyscapes, and most of all, native forests such as were seen by Columbus when he sailed past. What else IS there? Oh yes — people who want to protect these gifts. People who will fight to protect these gifts. 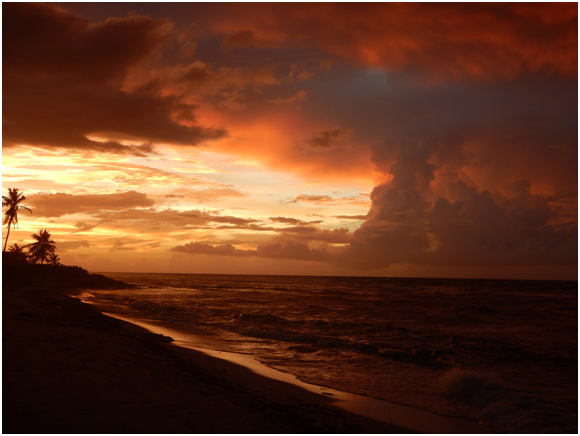 On turtle patrol, south side 6 AM

Caymanians and residents, please elect people who will protect our shores and our trees. Press them to open up the back rooms where deals are made in secret. Make it easy for those of us who live here to discover who is buying up our land. And governments (elected and staff) step up to the democratic plate, not just once every four years. Seek our views, listen to all, not only the noisiest. Listen to your own experts. Think with the brains God gave you as Edmund Burke counseled you to do. And govern.

In the meantime, let us all lead a quiet life. Keep those breezes clean and breathe deeply of them.

[if you like this and the other original poems, join or donate to the National Trust for the Cayman Islands. Go to their website. Pay them, not me. But note — they have no say in this blogsite. It is my own. Thanks. Be well.]